Note: A couple months after this chapter was originally published, I wrote a bonus chapter that takes place during the years that we skip between our last chapter and this one. This bonus chapter gives us some closure for Phoenix that I’m hoping you guys will appreciate!

You can click here to read this bonus chapter, if you’d like! Just note that I also link this bonus chapter again in a Gen 9 chapter (the time when I actually wrote it), so you’ll see it linked again later! But it’s actually more relevant to share it before THIS chapter instead, so I’m doing so retroactively! 😀

Hope you enjoy both the bonus chapter and the real one below! Thanks!

Emberlynn smiled in relief as she and Xander stepped out into the cool evening air. Even with the air conditioning in the convention hall, she’d found herself feeling so tired and overheated all day — maybe it was her costume or the crowds of people or all the time she spent on her feet…

Or the tiny human being currently growing inside her.

Okay, probably that. Emberlynn smiled as she and her husband continued making their way down the city sidewalk in search of food. 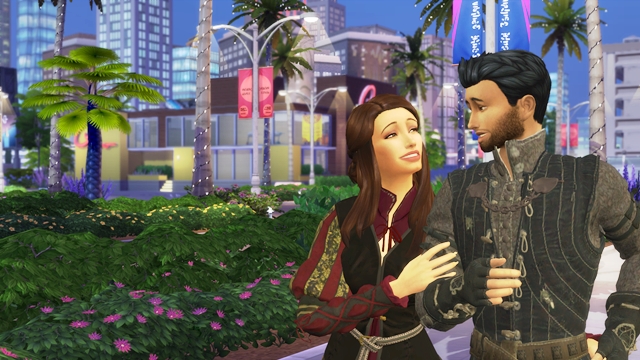 “You sure you don’t wanna head home and change first?” Xander asked her with a smile, pulling away from her slightly so he could look her costume up and down for a moment.

Emberlynn shook her head. “Nah, I’m starving. Don’t forget I’m eating for two now!” She gave him a warm smile before continuing.  “And besides, nobody’s gonna bat an eye at these costumes.” She assured him. Even if it wasn’t the weekend of the convention, eccentric outfits were just part of the culture of the city.

“Ah, but these are award-winning costumes designed by the one and only Emberlynn Rosebrook!” Xander teased. “Means they’re bound to turn some heads, right?”

She rolled her eyes, but giggled. “You’re still trying to give me a hard time about entering the costume contest, aren’t you?” 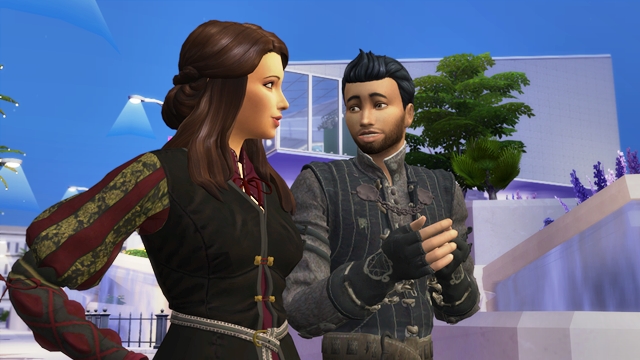 Emberlynn’s smile widened. Even with three films under her belt, it still blew her mind to realize that her hard work had paid off and she was finally living her dream. The hours were brutal, it was anything but glamorous, and the pay wasn’t as much as she used to imagine it would be… But she was still loving every minute of it.

“Yeah, well until I get my Oscar, this is the best I can do.” She replied sarcastically. “Let me have this!”

“Fair enough… Guess you’ve gotta start working on our next costumes then, so you can keep that winning streak going. San Diego Comic Con’s just a few months away!”

“Pfft! As if! I’ll be massive enough to have my own orbit by then!”

Xander smiled. “Exactly. Which is why we invest in a bunch of body paint for your belly, right? Then I’ll be Darth Vader, and you can be the Death Star!”

A loud burst of laughter spilled from Emberlynn’s lips. “Seriously?”

Her husband wrapped an arm gently around her shoulders. “Hey, it’s either that, or I can be James and you’ll be the Giant Peach?”

They giggled together all the way to the restaurant, coming up with more and more ridiculous costume ideas along the way.

Since it was a Saturday night and they had neither reservations nor any star power between the two of them to pull any strings at one of the swankier restaurants, they’d settled on a tiny burger joint tucked away in the corner of the city. And honestly, that sort of cheap, greasy food was just the sort of thing Emberlynn had been craving lately. Yup… between this baby and all these awful cravings, I’m definitely gonna be big enough to be the Death Star soon…

As they made their way inside and started looking for an open table, Emberlynn was surprised to hear a voice calling out to her. “Hey, Emberlynn!” 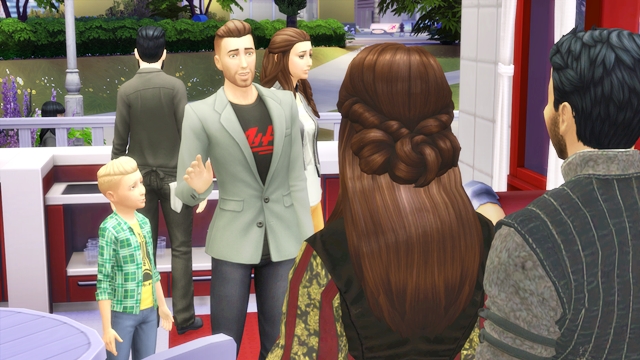 She smiled warmly at the sight of a familiar face. “Oh, hi Lawson! Didn’t think I’d run into you in a place like this.”

The older man shrugged. “Out with the kiddos, trying to keep a low profile, you know how that goes.”

Emberlynn simply nodded, though, of course, she truly had no idea. People weren’t exactly scrambling for autographs or pictures with a costume designer.

“Sammy and Donovan, right? It’s nice to meet you.” She smiled at the teenage girl and young boy at Lawson’s side. “I’m Emberlynn… And uh, just so you know, we were at Comic Con today.” She explained. “We don’t dress this fabulously all the time.” The little boy let out a small laugh at her joke, but the older girl simply scowled, clearly uninterested.

“This is the lady who designed all of daddy’s cool space outfits in Among the Stars.” Lawson explained, ignoring his daughter’s displeasure. “And it sounds like we’ll be working together again soon?”

“Meeting with Marv on Monday to look at the script.” Emberlynn smiled happily as she spoke before turning apologetically toward Xander. She hadn’t meant to leave him out of the conversation. “This is my husband, by the way. Xander.”

“Great to finally meet you,” Lawson reached out to shake his hand. “Emberlynn’s told me a lot about you. You work at one of the recording studios downtown, don’t you?”

Xander nodded. He’d spent the past few years as the assistant to the head sound engineer, hoping to one day take on the role himself (and maybe, if he was lucky, run the studio himself someday). “In fact, I just finished up some mixing on the new Heartthrobs album the other day…” He eyed Sammy significantly as he spoke.

Sure enough, that did the trick. The young girl’s eyes lit up instantly. “No way! You know the Heartthrobs? You’ve heard their new album?! But it’s not out til April!” 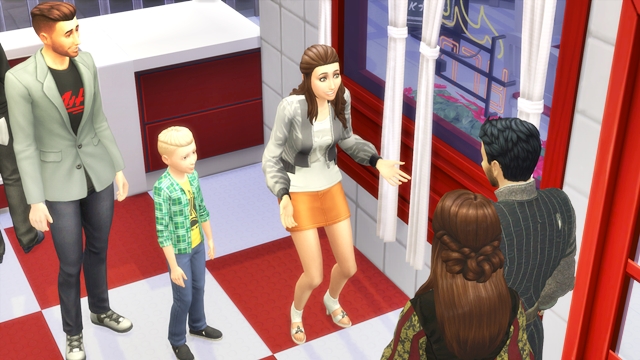 He smiled. “Yup! I’ve probably listened to that thing like a hundred times by now. It’s pretty sweet…”

Their smalltalk continued for another minute or two until Lawson finally bid them goodbye and headed to the door with his children. 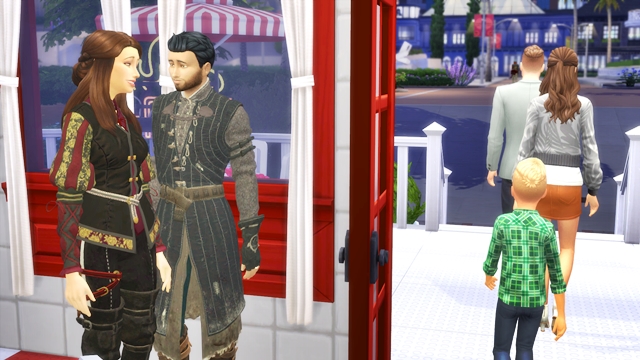 Emberlynn and Xander were still laughing together when they finally took a seat at their table and placed their orders. “Wow… I can’t believe my husband gets to just casually name-drop the Heartthrobs like it’s no big deal.” Emberlynn marvelled.

“Yeah, and I can’t believe my wife gets stopped for smalltalk by freaking A-list Hollywood actors!”

She shook her head slowly. “Do you think we’ll ever get used to this?”

Xander appeared thoughtful for a moment. “Maybe someday. But it really is amazing, isn’t it? To think that we somehow ended up… here.” He gestured vaguely around them as he spoke.

His wife raised an eyebrow. “Sitting in a crummy little burger joint?” She teased.

“Yeah! I mean, who’d ever think we’d lower our dining standards this much… It’s crazy!” He replied, playing along.

“Mm… And you know what’s even crazier?” Emberlynn asked. “That in like, six months, we’re gonna be parents.”

“I know!” He grinned back at her. “And actually, speaking of that, I was thinking… It’s probably been long enough, hasn’t it?”

Emberlynn eyed him curiously. “Long enough for what?”

“We can tell people now, can’t we? About the baby? 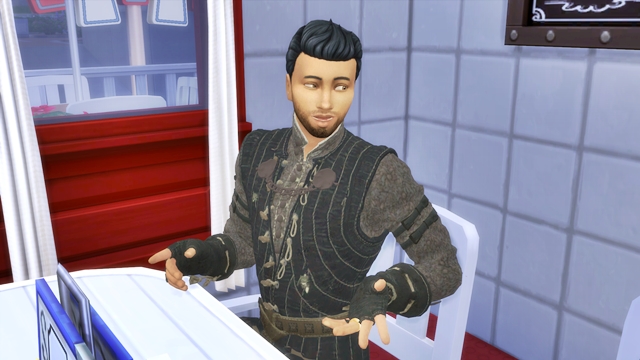 Her face fell instantly at his words. “Oh… Right. Yeah.”

“I do.” She assured him. “I just… I dunno.” Emberlynn bit her lip, too ashamed to admit what was troubling her.

A look of understanding made its way to Xander’s face. As she’d expected, her husband knew her well enough to figure out exactly what was going on. “This is about your mom, isn’t it?”

With a small sigh, Emberlynn nodded.

Though she humored her mother with a handful of phone calls each year, Emberlynn had seen Gigi in person exactly three times in the past seven years: once during a visit back to Windenburg for Christmas with Phoenix, once for Zelda and Jace’s wedding, and once for Tristan’s.

For their own wedding four years ago, she and Xander had eloped to Hawaii, just the two of them. They hadn’t invited anyone else. And it was perfect.

But if they had decided to invite their families… Would Emberlynn even have wanted Gigi there? Though she’d never imagined herself to be the type to hold a grudge for so long, here she was, as estranged from her mother as ever, even after all these years.

Phoenix had flown out to California to visit Emberlynn and Xander once every year since they’d moved there, but Emberlynn had never invited Gigi to do the same. She always managed to find some excuse.

But once the baby was born… What excuse would she have then?

“Look, Ember, I totally understand.” Xander’s voice called her back to the present. “I mean, you know how long it took for things with me and my mom to go back to… well, ‘normal’ is probably pushing it. But you know what I mean.”

Emberlynn nodded. “I do. And I also know exactly where you’re going with this… And as much as I hate to admit it it, I know you’re right.” The reluctance was apparent in her voice. “So you don’t have to say it.”

Xander appeared almost amused. “Oh yeah? Am I really that easy to read?”

She couldn’t help but smile slightly. “You are. Sorry.”

“So enlighten me, then. What was I was gonna say?”

She sighed, muttering her reply like a child who’d been forced to admit she was wrong. “That no matter how bad things are between us, she still deserves the chance to meet her grandkid.” Ugh. Why does he have to be right?

Xander’s eyes widened. “Woah, did those pregnancy hormones give you psychic powers or something? Creepy…”

His wife rolled her eyes. “You’re a lot like Papa sometimes, you know that?” She admitted. And she wasn’t just referring to his cheesy sense of humor. 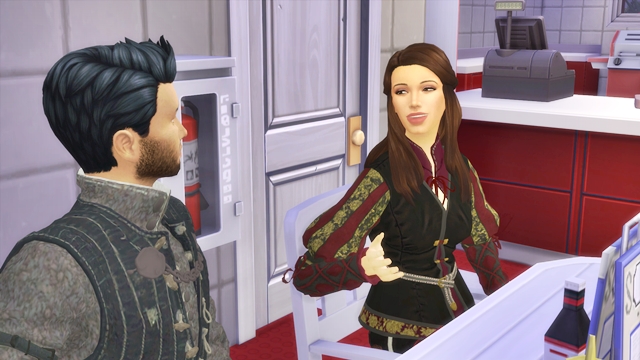 Xander smiled. “I’m gonna take that as a compliment.”

“It was.” Emberlynn assured him, returning his smile. “Let’s just hope our baby inherits all that humor and wisdom too.”

“Hey, as long as it ends up with your brains and good looks, it works for me!” 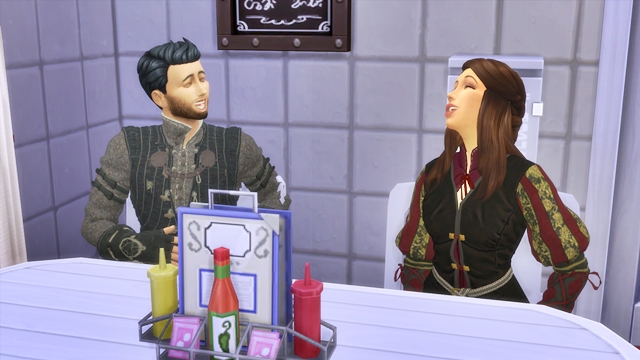 As soon as their laughter died away, Emberlynn took a deep breath, ready to continue the discussion. “Okay… so how about this? We call our parents in the morning — all of them — and we tell them the news.” She suggested. “But we don’t invite anybody to come visit yet. We’ll just… feel it out and see what happens.” 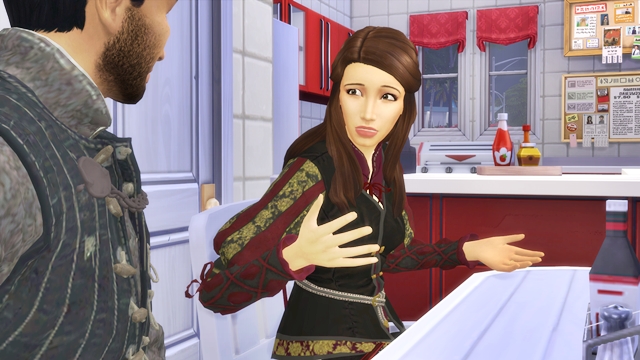 Her husband nodded in agreement. “We don’t have to rush into anything. All I’m saying is we should keep your mom in the loop about all the baby stuff… And maybe try and keep an open mind about inviting her to visit someday? Preferably before our kid heads off to college?” 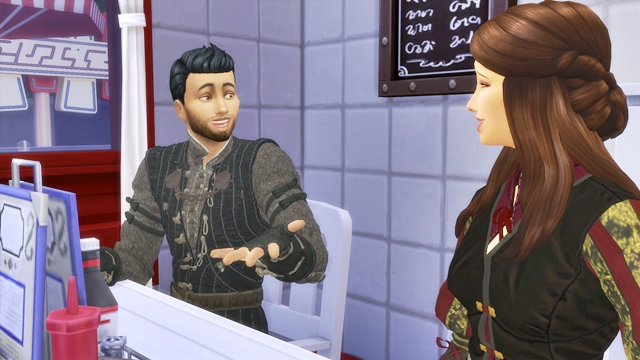 Emberlynn smiled. “I think I can live with that arrangement.”

But underneath her smile, Emberlynn couldn’t help the twinge of worry and unease that bubbled unpleasantly in her stomach. The thousands of miles she’d put between herself and her mother had made it so easy to turn her back on all those painful memories. She’d spent the past seven years fighting so hard to outrun them.

But she now realized that she couldn’t keep running forever.