“Huh?” Emberlynn jumped slightly as Zelda snapped her fingers right in front of her nose. “Sorry…” She muttered.

Her best friend rolled her eyes. “I keep telling you that hanging out with those idiots is making you lose brain cells, but this is taking things to a whole new level.”

Emberlynn shook her head. “I was just distracted.” And exhausted, she added mentally.

She’d stayed up past two in the morning chatting with GeekWithAGuitar. Their difference in timezones usually meant she only caught him online late at night, but last night had been much later than usual — Emberlynn just couldn’t sleep. She was too wired and excited after seeing Jace earlier that evening. 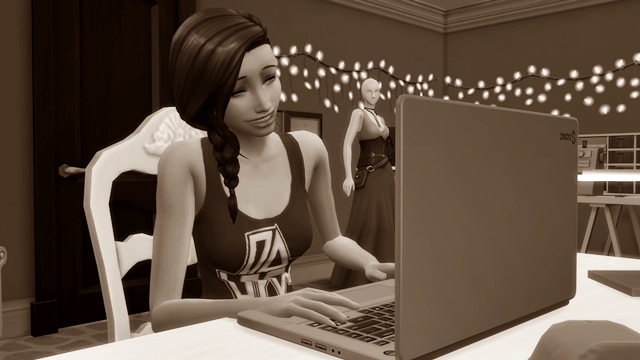 They’d met up at his place after dinner to mess around a little bit, and ended up going farther than they’d ever gone before… Still not all the way, but pretty darn close.

It had been so many months now since the nights she’d spent with Mason that it all felt nearly as terrifying and exciting as it had the first time, but even better too… Jace was clearly much more experienced than Mason had been, and the pleasure he’d given her had been more intense than anything she’d ever felt before.

The fact that he was only standing about twenty feet away from her made the whole thing even more torturous. The two of them had been good about ignoring one another at school, but after last night, Emberlynn had difficulty looking at him without memories rushing back to her. She felt a jolt of electricity course through her body at the mere thought of how he’d made her feel…

Emberlynn did her best to chase the thought away, mortified at the prospect of letting herself get turned on in the middle of the hallway at school. God, Emberlynn! Get a grip!

“Anyway,” Zelda continued, her voice calling Emberlynn back to the present. “You’re still coming over early to help me finish my costume tomorrow, right?”

“Of course!” Emberlynn smiled warmly at her cousin. “I can’t wait to show Onkel Tam mine too.” As usual, she had designed and sewn her own costume while the rest of her family opted to reuse their old, store-bought ones. She was proud that Zelda had decided to make her own, for once. “Is he excited? Nervous?” She asked kindly.

“Both, I think!” Zelda replied with a small laugh. “You know dad though — he’ll never actually SAY he’s nervous… Just starts getting all hyper and jittery and weird about stuff. He rearranged all the furniture in the dining room TWICE last night because he wanted to ‘try a new map layout’.” Zelda shook her head in amusement. “Papa finally got him to chill though.”

“Well that’s good.” Emberlynn smiled, imagining how her uncle’s behavior must have looked. “I can’t blame him for being nervous though… this is a pretty huge deal!”

She could still remember several years ago when her Onkel Tam had taken over and become owner of the tiny comic book shop where he’d worked for years. And now, this weekend was the grand-opening of the store’s new location, which would have more than double the space of the original. Tam was throwing a grand-opening party Saturday evening to celebrate, complete with cosplay, of course.

“And you ARE gonna be there, right? Not gonna ditch us for your cool new friends, are you?” Despite the teasing smile on Zelda’s face, Emberlynn could detect a hint of bitterness behind her words.

“Come on, Z. This is HUGE for Onkel Tam. I wouldn’t miss this for the world. You know that. You know me!”

“Do I?” Zelda asked, her eyebrow raised. There was no smile on her face this time.

Emberlynn sighed heavily in frustration. “Seriously? This again?!” Cleo and Athena had already been pulling away from her, especially the past few weeks. But now Zelda too? “We’ve been over this so many times, Z. It doesn’t matter who I’m friends with, okay? I’m still me.” She shrugged. 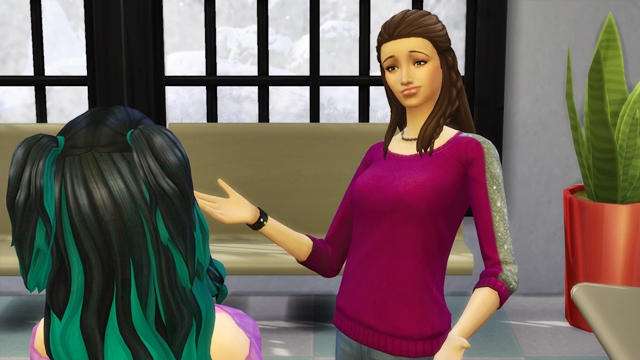 “I know you’re still YOU… But it’s like there’s this other side of you that decided to come out as soon as you started hanging out with those popular jerks. All of a sudden, you turned into Two Face. And I miss Harvey Dent.” Zelda added almost sadly.

Emberlynn could feel her frustration slowly beginning to rise. “Okay, you’re being ridiculous. I’m not —“

“Hey, Emberlynn.” A deep voice called from off to her left.

Her stomach did a somersault at the sound. “Oh… Hey, Trent. What’s up?”

“Nothing… I was just kinda hoping I could talk to you for a sec… Alone?” He added significantly, glancing at Zelda.

To Emberlynn’s relief, Zelda did not argue. With a soft groan of frustration, her cousin moved several feet down the hallway toward an empty bench, pulling out her cellphone, no doubt busying herself with YouTube or Instagram. The school day did not officially begin for another ten minutes or so, and Emberlynn knew Zelda liked to take any opportunity she could to check her social media accounts.

Trent watched her walk away over Emberlynn’s shoulder before finally speaking again. “Sorry if I interrupted or whatever.” He didn’t really SOUND very sorry, but Emberlynn didn’t mind. 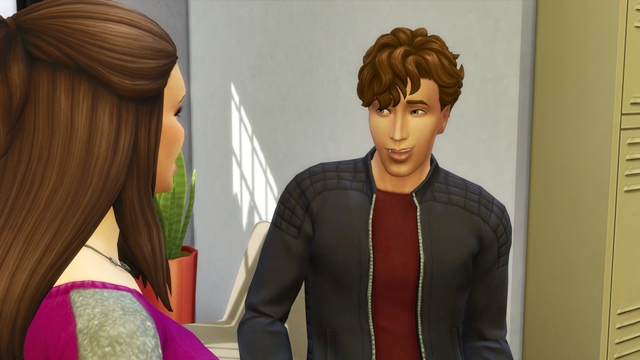 “Anyway, I just wanted to ask if you were busy this weekend.”

“This weekend?” Emberlynn fought hard to keep her voice casual, but knew she was failing. “Why?”

Trent smiled at her, making her knees weak. “There’s this bar I’ve been wanting to try. Everyone says it’s super chill… And the best part is, they like, NEVER ID anybody. They’ll serve you anything, even if you aren’t old enough.”

“Sweet!” Emberlynn smiled. Bars really weren’t her thing — in fact, though she was now old enough to go to one, she still hadn’t taken the opportunity to do so. It wasn’t exactly something that interested her…

But when Trent Ziegler was the one inviting her, that was a different story.

She beamed at him. “Yeah! Definitely. So we’re all gonna meet there? When?” Emberlynn hoped she didn’t sound too eager for details.

Trent shook his head. “Not all of us… Just you and me.” He clarified.

Emberlynn’s eyes widened. Holy shit, am I dreaming?! She and Trent had been texting each other more and more lately… But she’d thought he was just being friendly. Was he actually interested? In her? 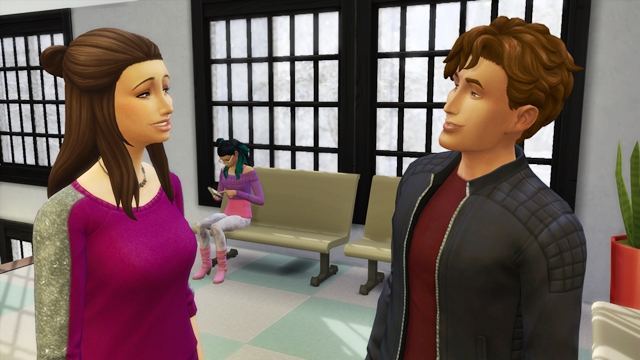 “I do!” Emberlynn replied with almost too much enthusiasm. “I mean, yeah. Yeah, that’d be cool.”

He gave her another heart-stopping smile. “Perfect. So I’ll see you tomorrow night? At like seven?”

“What’s wrong? Already got another date lined up?” Trent teased.

Emberlynn shook her head. “No, it’s just… I’ve got this, uh… family thing.”

“A party.” She clarified.

“Bail? But… I can’t just ditch them. It’s the grand opening of my Onkel’s new store.” Emberlynn tried to explain. “He’s been planning this party for months.”

Trent raised an eyebrow at her. “This is the Onkel who owns that weird little nerd store, right?”

He let out a low laugh. “Pffft. So you’re gonna be hanging with your family and a bunch of nerds? Sounds pretty fucking lame to me.”

Emberlynn realized with a jolt that, though Trent and his sister knew about her love of costumes and her father and uncles’ love of all things nerdy, they never realized just how much the two things overlapped. Trent had no idea just how much of a ‘nerd’ she was herself… And Emberlynn intended to keep it that way.

“Yeah, it’s gonna suck. I’ve been dreading it for weeks.” The lie came so easily. “I really don’t get why it’s such a big deal. It’s stupid.” She tried to appear as disinterested as she could as she spoke.

“All the more reason to bail though, right? And now you’ve got the perfect excuse.” Trent gave her a little wink.

“I know. But… But my parents are basically forcing me to go.” Emberlynn replied almost desperately.  “I don’t think they’re gonna let me off the hook this time.”

Trent sighed heavily. “It’s okay. I get it. Can’t disappoint Mama and Papa, right?” This time, his low chuckle was devoid of any warmth.

“Of course you do.” He smirked at her as he spoke, and his gaze was practically piercing into hers.

Emberlynn felt herself beginning to panic under his gaze. Shit. What am I gonna do?! She couldn’t pass up the chance for a date with Trent, but it would feel so wrong to miss out on her Onkel Tam’s big moment…

“Okay, what about this?” The words spilled quickly from her lips. “What if we make it eight? That stupid nerd party starts at like six. I’ll hang out for an hour, then say I don’t feel good or something. Bail early and head to the bar?”

Trent eyed her for a moment or two, saying nothing. Emberlynn felt like her heart was about to burst out of her chest as she waited for his reply. 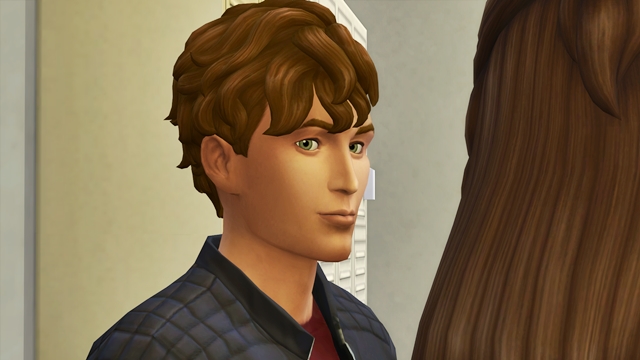 “Alright. Eight works for me.” He replied at least. “I’ll text you the address tonight.”

Emberlynn let out a breath she hadn’t even realized she was holding. “Sounds good. See you then.”

Trent gave her one last smile before walking away and vanishing up a nearby stairwell. As soon as he was out of sight, Zelda reappeared at Emberlynn’s side.

“What was that all about?” She asked.

Emberlynn felt a wave of relief wash over her. Clearly Zelda had not heard their conversation. “Nothing, he just had a question about our art project…” She made a show of pulling out her phone and checking the time. “The bell’s gonna ring any minute… I’ll see you later, Z.”

As she walked away, Emberlynn finally let the reality of what had just happened sink in. She was going on a date with Trent Ziegler! It was something she’d been dreaming of for nearly two years and now, after all this time, it had finally come true! 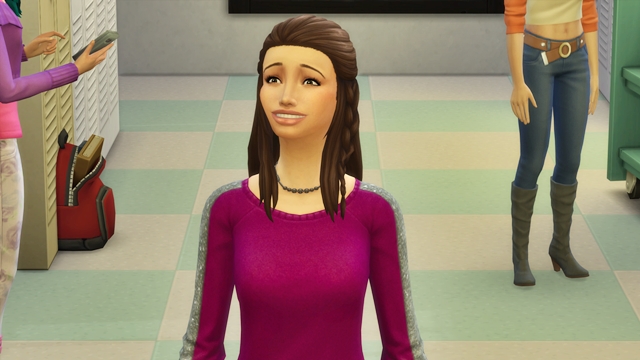 And that was the only thing that managed to dampen some of her excitement — the fact that she had no one to celebrate with.