Mari stood in the doorway of Tobias and Colette’s bedroom, sighing softly.

That’s my Tobi… always leaving a mess. She couldn’t help but laugh softly to herself as she got to work putting away some of the clothes that had been left strewn about on the floor. 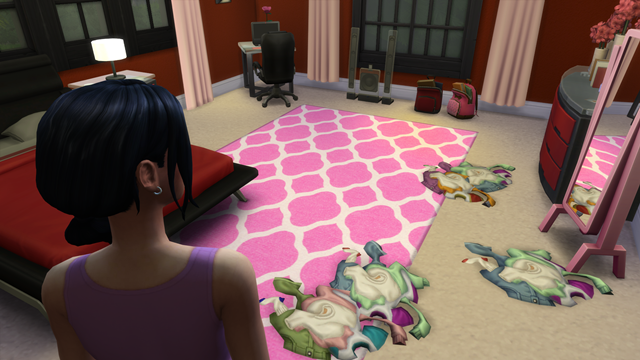 Her son and new daughter-in-law had left that morning for a weekend of camping – a honeymoon, of sorts – on the same lake as the summer camp were they had first met as children. Diego and Amelie had paid for the trip as a wedding gift… One that the young lovers had graciously accepted.

They both work so hard… They deserve a weekend away. Mari smiled to herself for a moment. Cleaning up the mess they’d left in their bedroom was the least she could do for them… And she’d been on something of a cleaning-frenzy recently anyway.

Mari had been working hard to keep busy the past couple of days, mostly to help take her mind off of her conversation with Stefan. It still stung to remember her son’s reaction when he finally learned the truth. But at least now he understands… Mari tried to tell herself as she began straightening up the mess Tobi and Colette had left behind on their dresser.

She found some crumpled study notes, a few bottles of Colette’s nail polish, a wrinkled pair of socks, and an old baseball card.

The Willow Creek Ravens… Mari furrowed her brow as she glanced down at the worn card in front of her. The name seemed so familiar… But she couldn’t immediately place it. 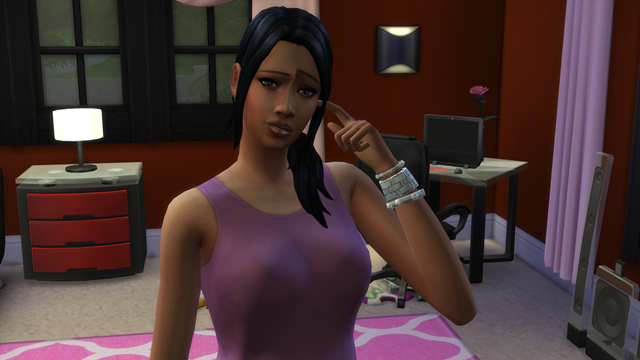 Dad’s friend Nora… Her mind travelled back to a meeting from several months ago.

The woman had mentioned that her older brother used to play for them, didn’t she? But that’s still not it… Mari realized. Even then, the mention of the name had stirred an old memory in her… One she could not immediately place. At the time, she’d merely brushed it off. But this time…

She looked down at the baseball card once more, and her gaze fell on the player’s name, emblazoned in gold across the top: Joshua Yuen.

Mari’s breath caught in her throat as she read the name a second time, then a third.

And as her eyes traveled downward to take in the man’s painfully familiar face, her mind traveled as well – to a warm summer night nearly eighteen years ago…

“One more, please?” Mari asked sweetly, waving a hand at the bartender as he passed.

He nodded slowly, without even asking what she wanted. Mari was familiar with most of the bartenders in Windenburg – and they all knew exactly what she liked – a Wrench on the rocks with lime. With a small wink, he slid the glass across the bar toward her. Mari accepted it gratefully.

As she raised the fresh drink to her lips, Mari took a quick glance over her shoulder at the other patrons of the tiny tavern. She’d expected it would be a slow night… But not this slow. With a soft sigh, she tapped her fingers impatiently against the worn wood of the bar.

Maybe I should try somewhere else. Mari thought as she took another swig. Or perhaps tonight would be another quiet one. Those were always both a blessing and a curse, it seemed. Oh well… At least the drinks are decent. She thought. And cheap.

She placed her empty glass back on the bar, and was just about to flag down the bartender a second time when a tall, athletic man appeared beside her, taking the seat on her right.

“You can put her next drink on my tab.” He called out before she had a chance to speak.

The man wore a wry smile as he spoke, then turned to face her.

“You’re lucky I speak English.” She said with a smirk. Damn, he’s gorgeous. Mari looked him up and down for a moment. It seemed like her luck was finally turning around…

He gave her an easy smile. “You have a lovely voice. You can speak to me in whatever language you like.”

Mari giggled softly. He had such a strange accent — Nothing like her father’s. It was fascinating to listen to him speak… And to watch the way his lips shaped each word.

She gave him a small wink before replying. “Dein Akzent ist witzig.”

“Well, I don’t know what you said, but it sounded pretty.” He laughed. 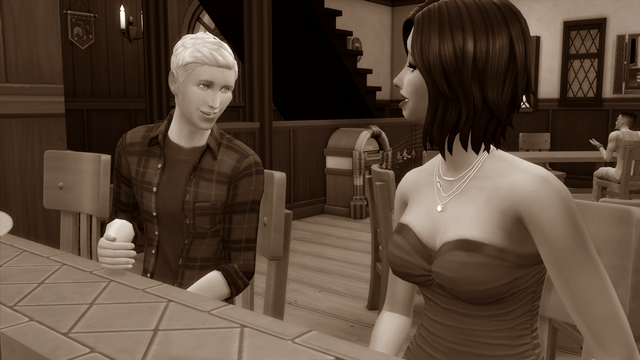 Mari watched as his eyes traced over her face. Piece of cake. She thought, amused. This one would be easy.

“I said your accent is funny.” Mari’s voice was teasing. “It reminds me of that movie… Forrest Gump?”

A burst of laughter reached Mari’s ears. “Forrest Gump, huh?” The man paused to order himself a drink. “I am from Willow Creek, but I like to think I’m a little smarter than Forrest.” 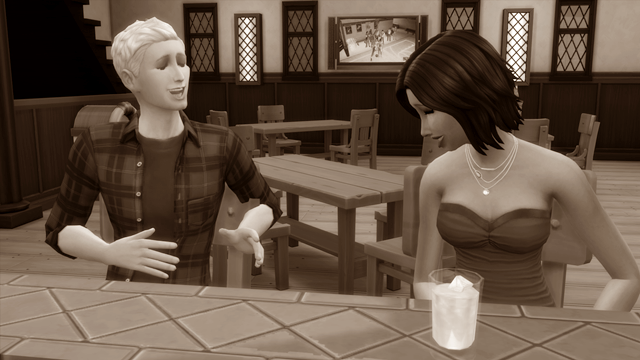 And definitely easier on the eyes… Mari added mentally. “And hopefully blessed with a better name..?” She looked at him expectantly. No matter how low she’d fallen, Mari had never slept with anyone without at least knowing their name… And she wasn’t about to start now.

He smiled and offered her his hand. “Josh Yuen.”

Josh’s hand was warm and rough in hers. “Mariana Rosebrook… But you can call me Mari.” She replied sweetly.

Josh glanced up at the television over the bar and his smile widened. “The football season is about to start, right?” Mari nodded in reply. “The baseball season just ended back home.” He continued. “Have you ever heard of the Willow Creek Ravens?”

“Um… no?” Mari shrugged slightly, then smiled softly at him. “But I take it you play for them?” He certainly had the build of an athlete.

He laughed softly. “I do, actually.” Josh leaned closer to her. “So you know I know my way around the bases.” Mari could tell by his tone exactly what he was getting at. She felt her heartbeat quicken in anticipation.

“That’s a relief.” Mari batted her eyelashes at him as she spoke. “Because I don’t really know much about baseball…” She shrugged innocently. “But I’d love for you to teach me.”

Josh slid off of the bar stool. “Would you like to get out of here?” He asked.

Mari rose to her feet and beckoned him toward her with a crook of her finger. “Who says we have to go anywhere?” She whispered, nodding her head toward the nearby supply closet.

It wouldn’t be the first time she’d banged a guy in that closet. Why not?

The way he said the words sent a wave of electricity through her entire body. Thank God he said yes. She thought as they approached the closet doors. I don’t think I could wait much longer…

Mari gasped in surprise as she felt a pair of strong hands on her waist. Josh spun her around forcefully to face him and pushed her back against the closet door. She wrapped her arms around him and pulled him closer to her, relishing in the heat of his body against hers.

Mari raised an eyebrow at him. “Are you sure you can handle this?” She teased.

His response was a kiss — hot and wet as his lips moved against hers.

Mari let out a sigh as she reached behind her back, her hand fumbling to find the handle of the closet door. As she pulled it open, they stumbled back into the darkness… 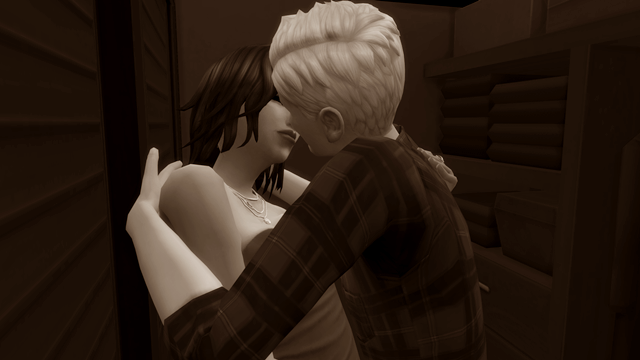 Holy SHIT. Mari gasped for breath as she stumbled back into the dim light of the nearly-deserted bar. She reached down, straightening her skirt as best she could. Somewhere in the back of her mind, she tried to remember whether she’d taken her birth control that morning. It was easy to forget sometimes.

“So, Mari, would you like to go for extra innings at my hotel?” Josh’s deep voice and playful grin brought Mari back to the present.

She shook her head, trying to hide her regret as best she could. Are you fucking kidding me? Let’s go! Mari almost wanted to say. But she needed to get up early — she and Humberto had plans the next morning.

Humberto… The thought of him sent a wave of guilt crashing over her. Why should it matter? He’s not my boyfriend. She reminded herself firmly. Mari did her best to will the sensation away.

“I’d love to, but… I can’t.” She smiled softly at the man in front of her. “But… thanks.” Mari winked and blew him a kiss. “You’re an excellent teacher.”

Josh gave her one last smile, and almost looked like he wanted to say something in reply. 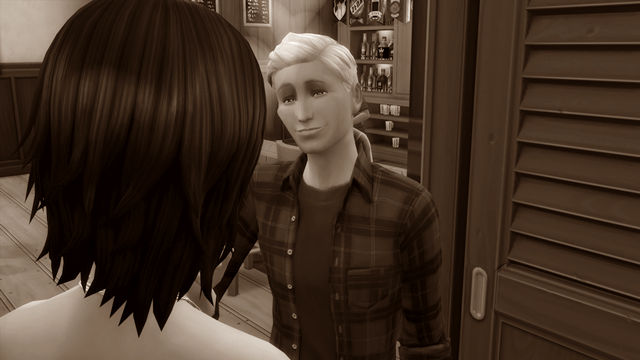 But Mari simply turned away from him and headed for the door, finally allowing her mask to slip away and the weight of her guilt to consume her…

Mari’s heart beat violently in her chest as she pulled herself back to the present, her eyes still fixed on the image of the man’s face.

His narrow nose and thin lips, curled into an all-too-familiar smirk…

“No.” Mari whispered aloud, her voice firm and cold. “It can’t be. It… It could have been anyone…”

She looked down at his face once more, and felt her stomach turn. Mari closed her eyes tightly, willing the feeling away.

Leave it alone, Mari. This doesn’t mean anything. With a trembling hand, she returned the card to its spot on the dresser.

Your boys already have a father, remember? The best father in the entire world. Mari turned away, abandoning her cleaning as she headed for the bedroom door.

And besides… What hot-shot sports star would want anything to do with two kids he’s never even met? With a flick of the light switch, the room fell into darkness once more.

I’m sure it’s just a coincidence anyway. This doesn’t mean SHIT. It’s just a stupid old baseball card and some faded, half-drunken memory. It’s all in your head. She told herself as she closed the door behind her.

And for a moment, Mari almost believed it.

Yes! The one and only Josh from JoieWilder’s Thoreau Legacy  is indeed the twins’ father! HUGE shoutout to Julyvee94 for being the ONLY reader to figure it out!

72 thoughts on “Interlude: Leave It Alone”